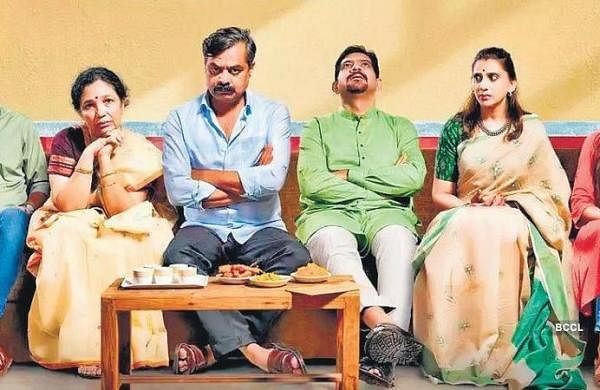 Making a film like Sakutumba Sametha requires a deep understanding of not just filmmaking, but also the intricacies of dynamics within families. Sakutumba Sametha director Rahul PK has clearly done his homework well. The various actors in a family, their individual characteristics, interpersonal equations, and other such emotions are captured in a simplistic yet delightful way.

The film begins with an montage song, composed by Midhun Mukundan, which is interspersed with black and white photos from a wedding that gives us plenty of nostalgic moments. It’s the perfect start for a film like Sakutumba Sametha.

The story revolves around a future bride and groom – Shraddha (Siri Ravikumar) and Suresh (Bharath GB) – and their respective families. The two hook up through a dating site, and after much deliberation, their marriage is set. However, Shraddha begins to have doubts about the marriage and backs down. The families come in and under one roof attempt to resolve the situation in their hopes of restoring the marriage. It is through this discussion that we begin to see the different traits of each member.

As events unfold, we see if the bride and groom reconcile, and also note the various observations made about the marriage. The film ends on a brave note, and imaginative thinking might mark a trend in Kannada cinema.

While the management needs a round of applause, equal credit should go to writer Pooja Sudhir, who captures delicious nuggets about family life. Midhun Mukundan’s music is a plus and goes well with the film, where each actor plays in full-throttle roles supported by the author. Rahul features new faces Bharath GB and Siri Ravikumar who performed exceptionally well. Also worth mentioning are the supporting cast, especially Achyuth Kumar, Krishna Hebbale, Pushpa Belawadi and Rekha Kudligi.

Even with its complexities, Sakutumba Sametha, a production venture by Rakshit Shetty, is an entertaining watch, especially for its simplistic approach to a deep situation.