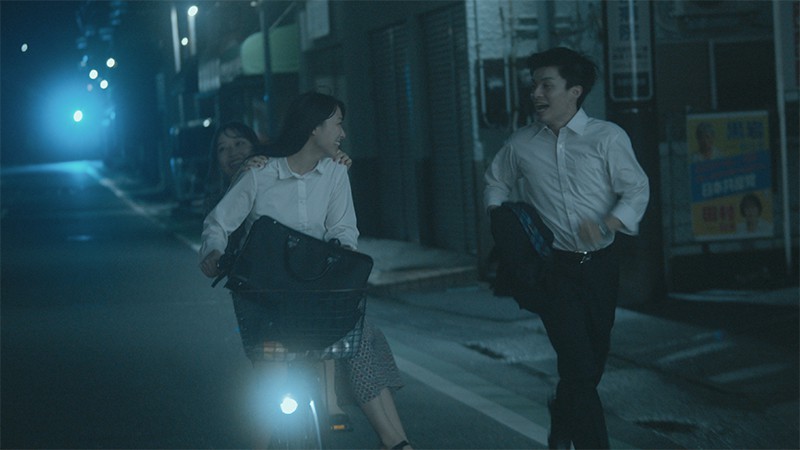 “It wouldn’t be fun if the kids took a taxi. The fun is in the walking.”

A time for recreation, a time for old sins to be exonerated, a time for bold and courageous leaps into the scariest places fragile souls could dream of – a time simply wasted. As these last hours begin to slip away, the realization of all these plans, all these desires, becoming permanently abandoned, guarantees drastic and unpredictable chaos to once again restore balance to our personal universes. Summer has come to die; As the first autumn sun rises above the horizon, the long, hot summer months roll out into the ocean until they are completely submerged by tides and lung-filling water. Witnessing such an occasion, a male head mysteriously emerges from the sandy beaches, blissfully unaware of the direction its night is about to take. It’s just the tip of the deceptively large iceberg that is Yuki Horiuchi’s “All Summer Long.”

“This boring summer that once seemed like an eternity must end,” says that head in the sand as the autumnal light kisses the eerily abandoned beach, signaling the end of Yamanobe and Kimi’s long journey into the night. Seeking to find out the whereabouts of a missing CEO, who saw their interview for Magenta come to an end, this mismatched pair set out to find snacks and drinks to fuel their adventure. Along with their Stand By Me mission, many people will cross their path, including two bored store clerks, Kyoko and Kento, who slack off until Kyoko abruptly leaves her introverted co-worker for a party before he’s gone. taken out for a drink. by their manager Makiko; Kimi’s close friend, Rinko, takes violent action against the older married man she refuses to stop seeing; and Shuichi, the first to meet the beachhead, desperately tries to reach Rinko to confess something that troubles him.

Spanning a single night, these events unfold in tandem with each other, overlapping more freely than the characters whose lives are intertwined by the grand designs of fate. Horiuchi’s characters are beautifully aloof, their situations as deadpan as the expressions on their faces, unveiling their complexities one goofy laugh at a time. Stemming from the savage incompatibility between the free-spirited and the reserved, the soft-spoken and the daring, “All Summer Long” playfully teases how such a word is void of substance, pushing and pushing how hilarious dissimilarities are what makes life just that little bit more interesting. And yet, for all its whimsy, for all its awkward pauses, the film wobbles above a grim realm, as if one misplaced step forward would draw something ugly and repulsive out of it; it’s something the film acknowledges, offering glimpses behind its sweet facade with nothing more than brief nods, but the brevity does nothing to lessen the impact of those nods.

Cast with relatively unknown actors who triumph in embodying their characters’ quirks, charms, and unsettling truths, “All Summer Long” is an ensemble piece brimming with young talent, none more than Ryo Igarashi and Ayano Kasumi, who take on the shy Yamanobe and the lively eccentric Kimi respectively. Despite the body language and facial expressions displayed by their cohorts, Igarashi and Kasumi take theirs to the next level, their blossoming friendship depends as much on their physical demeanor as the organically disparate script shared between them; bouncing off each other’s energy, the two fuel the story’s central journey with such incandescent liveliness while remaining entirely authentic that they remind audiences of their own long-lost youth. At the top of Horiuchi’s adorable film sits his head in the sand, a man so shrouded in mystery and intrigue that neither his origins nor his intentions are free from enigmas; he’s a captivating tour de force of fake wisdom and humor, and his limited physical presence makes his time on screen simply memorable!

Weaving together multiple narratives presents its own challenges, especially when it comes to pacing, but Horiuchi manages to keep his stories concise, only venturing into the trivial and routine when he needs the film to do so. His shooting style leaves the audience hanging on every word, every eye roll, every nod, and every quivering lip, while keeping viewers at a distance. Absorbed in its world is the more realistic sound design: there’s little non-diegetic score to distract and manipulate, keeping “All Summer Long” firmly but deceptively grounded in the real world. Despite that, there’s something oddly fantastic about this setup – it’s a testament to Horiuchi’s playfulness!

Horiuchi’s film is an eccentric entity, straddling too comfortably the fine line between the real and the surreal; he holds a mirror that everyone looking finds himself in, challenging his audience to cling to something they can relate to, while throwing curve balls to distract everyone from his true scent. Strange yet so familiar, what really sets “All Summer Long” apart is its casting, which lets just enough of their character’s startling truths emerge to crack the surface without deviating from the side of the yellow brick road. There is no more innocence in the agony of summer; as the season shifts into fall, all will find themselves in situations they could never imagine. Whether or not they learn anything from their experiences, or if they will simply fade away with the season remains to be seen.