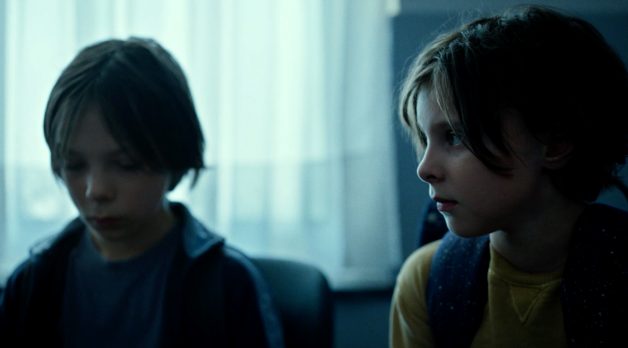 Opening today at the Film Forum in New York before, next week, rolling out to other theaters across the country, is Laura Wandel’s Playground, a surprisingly immersive and nuanced drama that immerses the viewer in the complex dynamics of childhood bullying. It’s Wandel’s first film after well-received shorts, and the film’s apparent simplicity belies a pre-production that had to be handled with incredible sensitivity. (As we’ll see below, Wandel worked extensively with her young protagonist, using devices such as finger puppets to guide her through her character’s emotional arc and get her to understand the “pretend” element. of the production process.)

In Playground, shy seven-year-old Nora (played with heartbreaking conviction by rookie actress Maya Vanderbeque) tries to fit in at her elementary school, but her quest for friendship becomes complicated when her brother, Abel (Günter Duret) becomes the target for naughty school kids. Keeping her camera moving at the level of her subjects, Wandel’s observational and non-didactic approach allows us to observe in real time a very young girl developing for herself a sense of ethics amid the violent turbulence of the seemingly the most carefree.

I spoke to Wandel briefly via Zoom, where his answers were provided through an interpreter. Playground is out of Film Movement, and at the Film Forum, it is associated with the short film on the same theme by Jay Rosenblatt, When we were bullies. (Read Rosenblatt’s interview with Lauren Wissot here.)

Director: Tell me about your own journey as a filmmaker and how Playground became your first feature film.

Wander: When I was 16, I knew I wanted to be a filmmaker because I saw films that changed me, for example, Jeanne Dielmann, [23, quad du commerce, 1080 Bruxelles]by Chantal Akerman. [That film] was like a “body experience” for me. I came out of this film and I had to make films.

Director: And how this film in particular, Playground, become your first feature film? On the surface, it’s such a simple film, but, and especially as a producer, it’s also so complicated in its realization.

Wander: I believe school defines who we become as adults. When you come to school for the first time, you feel the need to integrate into this micro society. It was such an interesting subject for me, and I knew I couldn’t really handle that in a short. So it had to be a feature.

And more than the school itself, the playground is, for me, a kind of mirror of our society in general. In school, of course, we learn the curriculum, but more importantly, we learn to engage with other people. I wanted to have siblings in the film because it was important as a symbolic way to show that we’re all siblings, but sometimes we’re just willing to give up certain things to fit in, fit in. We all went to school, we all went through that, and I think everyone can relate to the characters in that movie.

Director: How did you begin to engage with your producer, Stéphane Lhoest, on this film, especially considering the unusual and complicated pre-production it would entail?

Wander: I’ve been working with my producer for 10 years. He actually picked me out of school and produced my two shorts, so it’s been a really long relationship. He always told me that he was waiting for me to make a feature film. I can really feel that he trusts me – he really trusts and supports my choices. When I was wondering how I was going to handle the kids, he also did some research, trying to find learning coaches. He was by my side all the time, making suggestions and researching with me. He is always the first to read what I write. I trust him.

Director: How did you come up with the idea of ​​using puppets to bring your young actor into his character?

Wander: I heard about this lady, who is a remedial teacher, a learning coach. She had worked on another feature film with a four-year-old child – someone who couldn’t read – and they had developed this [process] for that other movie.

Director: You said in another interview that your young actress, Maya Vanderbeque, said when you met her that she wanted to “give all my strength” to the film. How did she know about the film and did she have any references from her own idea of ​​filmmaking and the kind of film she might be involved in?

Wander: Her mother answered a regular cast and for this call there was only a very short synopsis that explained that she would be a sister and there would be bullying. But when she arrived she was already very emotional about the film as she herself had faced harassment the previous year. She kind of felt she had to tell the story to the world too. Sure, she had no experience at all, and she didn’t have a lot of movie credentials, but we spent a lot of time together and I showed her Ponyby Jacques Doillon, as well as The child on the bike, by the Dardenne brothers. We watched these movies together so she could get an idea of ​​where I was going.

Director: Let me ask you about, uh, the ethical and practical issues of getting such engaged performances from children. I’d love to hear from you about how you made sure the kids kept a boundary between acting and their real selves. Much of the film revolves around the fact that the game and reality are often the same thing, but at the same time Maya is playing a character who is not herself.

Wander: Maya is extremely mature. She can express her feelings really well, and I wouldn’t have chosen a child who was still plagued by bad feelings from things like that. I would also like to point out that the [youngest] The character in the film isn’t the target of the bullying herself – rather, she’s a bystander. Gunter [Duret], the other actor is older, so it was easier. With bullying at school in real life, he was more of a bystander, and that helped him understand feelings to play the target of bullying.

Director: How did you work with your director of photography, Frédéric Noirhomme, to hide and plan a film where the point of view is literally low?

Wander: The camera was actually strapped to his waist, and he had an assistant next to him carrying the batteries so they weren’t too heavy on his back. I was standing next to him with a small screen so I could direct the kids. In order not to exhaust the children too much, the director of photography and I chose the frames with our phones, both of us, a little in advance. We asked extras to intervene so as not to exhaust our main characters, who we brought in at the last moment to shoot the scene.