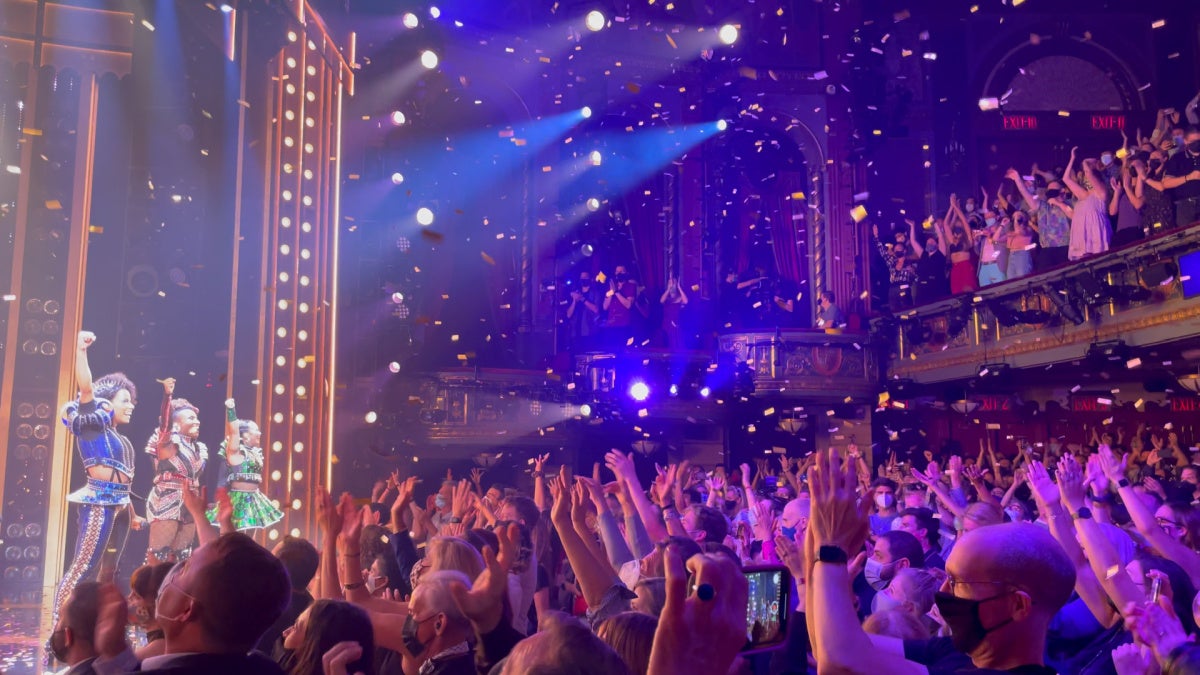 Theatergoers who couldn’t sit out this year’s Tony Awards will find some solace in “Broadway Rising,” a heartfelt tribute to all the shows that were shut down between 2020 and 2021.

It initially looks like the film might suffer from a touch of solipsism, as the actors talk at length about centering their feelings during a time that has caused so much suffering across the world. But director Amy Rice (“By the People”) wisely expands the story beyond the stars of the stage, powerfully demonstrating that behind the bright lights lies an entire ecosystem essential to the city.

As such, she includes a range of representatives for the tens of thousands of Broadway workers who found themselves unemployed and worse at the onset of COVID-19.

Usher Peter McIntosh, for example, was publicly described as “Broadway Patient Zero” when he became one of the first New Yorkers to test positive while working on “Who’s Afraid of Virginia Woolf?” Another early patient, who ended up living with long-term consequences, was “Jagged Little Pill” stage porter Ernie Frost Paylor. No one needed the work of costume designers John Kristiansen and Brian Blythe, leaving them with a closed business. And without anyone wearing suits, Winzer Dry Cleaners remained similarly silent.

Rice’s extensive network also includes performers and producers of shows such as “Six”, “Waitress”, “Hadestown” and “Lackawanna Blues”. And because it tracks their experiences in real time, from closing to reopening, it also ends up painting a miniature portrait of the pandemic itself.

But after the initial shock and desperation, many of Rice’s subjects land in surprising places. “Frozen” dancer Adam Perry is spending the first few months of quarantine battling COVID, then depression, as he wonders if he’ll ever work again. But when a fellow performer suggests using the time to start a business, he experiences a totally unexpected reinvention. Kristiansen and Blythe founded the Costume Coalition, hoping to help other theater makers. “Wicked” actresses Mary Kate Morrissey and Ginna Claire Mason are teaching musical theater lessons remotely to an incredibly adorable collection of pint-sized fans across the country.

Yet other participants are using the time to reflect on changes nationwide, determined to expand the nascent Black Lives Matter movement into lasting change. Ruben Santiago-Hudson and Lynn Nottage both view this time as an opportunity for introspection and motivation, each working on how theater can become more inclusive. Adrienne Warren, “Tina” star and co-founder of the Broadway Advocacy Coalition, notes that “The world is screaming in every way. And we can no longer pretend that we don’t hear it.

And then, on September 14, 2021, the lights come back on. The cast and crew come together once again, and Rice — who pulls us in when she should and holds back when she should — makes sure the thrill of opening night is palpable even for us.

She follows so many people (Patti LuPone, Danny Burstein and Lin Manuel-Miranda are among the other luminaries interviewed) that it’s hard to connect with everyone. But a few of the stories have a special impact, and together they build a message that each of them would approve of: through tragedy, melodrama or triumph, the show goes on forever.

“Broadway Rising” makes its world premiere at the 2022 Tribeca Festival.