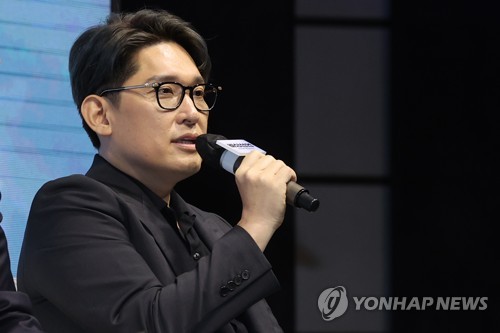 SEOUL, June 20 (Yonhap) — Imagine being stuck on an ill-fated flight where a mysterious deadly virus is spreading.

The story takes place on a flight, from Seoul to Honolulu, where the captain declares an emergency landing after a terrorist plants a deadly virus and the first victim dies within hours.

At a press conference in Seoul on Monday to promote the opening of the film set in local cinemas in August, writer-director Han Jae-rim said he wanted it to be a thought-provoking film about people fighting a disaster in addition to its appeal as a disaster genre film.

“I got an offer about 10 years ago. I thought the framework and plan for the film project was pretty good at the time but I didn’t know how to do it,” the director said on best known for “The Face Reader” (2013) and “The King” (2017). “And then, unfortunately, there have been many small and big disasters in Korean society over the past 10 years. As I watched them with a broken heart, a certain idea came to my mind, and then I thought I should do this project.”

He pointed out that he has made efforts to shed light on how people deal with disaster and their emotions after overcoming it or suffering defeat. He hoped audiences wouldn’t simply consume his film as entertainment.

The film caught the attention of Korean moviegoers from the initial production stage of its star-studded cast.

When asked how it was possible to have so many stars in the same movie, the director said even he couldn’t believe it at first.

“In fact, the actors here are iconic figures in the Korean film industry as well as around the world and others are also popular enough to play lead roles in other big-budget films. Any director would love to all the casters,” he said. “So I couldn’t believe these people were in my movie and I kept feeling confused during filming. I was confused whether I was shooting one movie or seven different movies at once. I kept feeling confused. felt honored and appreciated.”

Han said, watching the scenes after filming, that he was impressed by the outstanding performances of the actors. “There are a lot of passengers on the plane who aren’t there, but if you watch the movie, their acting will also be memorable,” he added.

Song Kang-ho, who was nominated for best actor for his performance in “Broker” at Cannes this year, plays In-ho, a seasoned police detective who is on board to track down a terrorist suspect after being told of his plan. attacks the plane bound for Hawaii. Jeon Do-yeon, who won Best Actress for her performance in director Lee Chang-dong’s “Secret Sunshine” at Cannes in 2007, plays Suk-hee, the struggling Minister of Land, Infrastructure and Transport to figure out the best way to protect Korean citizens from the terrorist attack.

Park Hae-joon’s character is Tae-soo who must make “a thoughtful decision” to save the nation as the head of a crisis management center in the presidential office.

Lee Byung-hun stars as Jae-hyuk, a father with aviophobia who is on board to treat his sick daughter. Im Si-wan plays Jin-seok, a mysterious young man who boards the ill-fated plane as it wanders around Incheon International Airport with no destination.

The film is slated to hit local theaters in August. It was selected for the Out of Competition section of the 74th Cannes Film Festival in 2021.