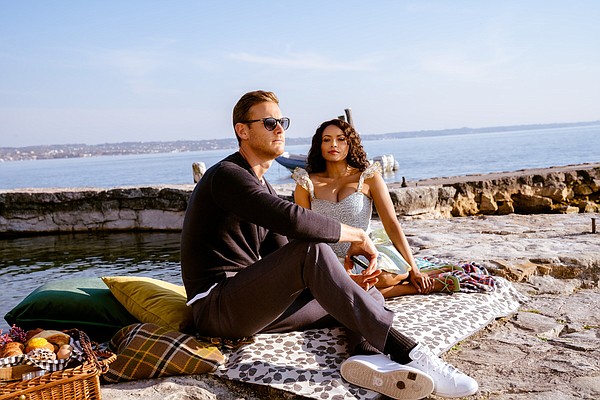 There are romantic comedies that will remain etched in my memory all my life, such as “While You Were Sleeping” and “Music and Lyrics”. And I’m not saying they are the best. They aren’t as popular or critically acclaimed as “Crazy Rich Asians”. They’re just the ones that resonate with me. “Love at the Villa” won’t make my list, but that doesn’t mean it’s a bad movie per se, or that it won’t be on someone’s list.

Every romantic comedy fan has a few titles that transcend the word “favorite.” They have a few cozy flicks that connect with the heart on a deeper level and generate the unique feeling of comfort that lets them curl up on the couch with a fluffy blanket, a glass of wine, and a pair of slippers.

These are movies where the Rotten Tomatoes score is unspoken language and the opinion of others is questionable. I’m talking about romance movies that weave one-to-one relationships with their audience members. I think it’s abnormal.

As for Netflix’s latest rom-com, “Love in the Villa,” it looks like the streaming giant has reached into its spice cabinet and added a Hallmark twist. Except it’s not a Christmas movie.

The story follows a Minneapolis third-grade teacher named Julie (Kat Graham) who is obsessed with “Romeo and Juliet.” She’s been saving up for years and planning the perfect trip to Verona, Italy with her boyfriend when he suddenly dumps her just before the trip.

Determined to have fun, Julie arrives in Italy after a 22-hour journey from hell filled with screaming babies and lost luggage. Finally, at her villa where she expects to rest, Julie is shocked to find a half-naked Briton named Charlie (Tom Hopper) in the space she has rented. Turns out the one bedroom villa is booked as a double.

And that provides the setup for this little story. It is neither dramatic nor original. But I appreciate that the film doesn’t try to make the narrative more than it is. It allows the main characters to take the lead and be what ultimately makes or breaks the story.

Charlie is in town working for a wine festival, and Julie is trying to attend all those romantic Romeo and Juliet related tours, as well as some of the typical tourist attractions. The pair try to drive each other out of the villa by prank-warring each other until they escalate too far and the police – er, polizia – arrive.

From there, most people can probably guess where the story is going. The couple is sunny, spending time together and slowly but surely getting closer. Like I said, “Love in the Villa” doesn’t serve up a new recipe. It’s not about trying to innovate in new territory. He knows exactly what it is, a simple and comfortable romantic comedy.

Some of the jokes fit perfectly with Charlie’s dry British audacity and Julie’s initial lack of fortune. Other moments feel a little forced. Luckily, those moments don’t last long and the movie continues.

The main strength of “Love in the Villa” comes from Graham and Hopper. It took me a little longer to figure out these characters because I kept seeing witch Bonnie from “The Vampire Diaries” and strongman Number One from another popular Netflix title “Umbrella Academy “. And since I had only recognized Hopper immediately in that title, I had no idea that he was in fact English.

When I finally settled into “Love in the Villa,” I saw Graham and Hopper make a cute pair. It’s not Sandra Bullock and Bill Pullman, but they do the work for this particular title. And that brings me back to where I started.

I really believe in the increased subjectivity of rom-coms for fans of the genre. Because usually, if you poll Western fans and ask them what the best Western title is, I think you’ll find a handful of common titles (and 1960’s “The Magnificent Seven” would probably be among them). If you ask fans of psychological thrillers what is the best psychological thriller, again, you’ll find a handful of common titles, “The Silence of the Lambs”, probably among them.

But if someone were to conduct this same experiment among rom-com fans, I don’t think there would be as much consensus. Every rom-com fan would have their own favorites, and I bet there would be more selections out of left field than is generally thought. Example… “While you were sleeping.” How many rom-com fans have this in the top spot on their list? (If this is yours, feel free to email me at [email protected] to tell me. We can exchange thoughts on Sandra Bullock.)

“Love in the Villa” is accompanied as a bonus by beautiful cinematography by Jose David Montero. And while I don’t often write about wardrobes in movies, Graham’s outfits looked just as good as she wore them. Hats off to Giovanni Lipari’s costume design. It’s not often that I notice outfits enough in a movie to notice them.

People looking for a cozy rom-com should find exactly what they’re looking for in “Love in the Villa.” It is now available on Netflix.