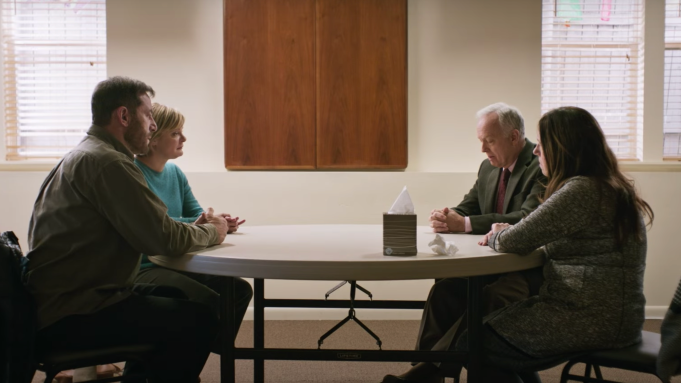 “Do you think you can attach a word to something to understand it?” To make you feel safe? “

These words come halfway through Fran Kranz’s first film, “Mass,” a calmly devastating and superbly interpreted film that details the meeting between the parents of a school shooting victim and the shooter’s parents. This phrase, spoken by the shooter’s father, strikes at the heart of the film, which emphasizes that there are no easy answers to be found in the aftermath of such a tragedy – and hindsight doesn’t always make things any clearer. .

Kranz is best known for his acting, playing roles such as Marty in “The Cabin in the Woods” and Claudio in “Much Ado About Nothing”. He both wrote and directed “Mass,” which premiered at the 2021 Sundance Film Festival last January. It’s a film veteran writer-directors would be proud to have on their resumes, and heralds Kranz as a skillfully talented filmmaker with an exciting future.

The film opens with a wide shot of a large church. Judy (Breeda Wool), who works at the church, stops and walks in. From there, we are quickly introduced to Anthony (Kagen Albright), a volunteer teenager, and Kendra (Michelle N. Carter), who works with two of the parents. They don’t do anything particularly exciting – they set up a table and discuss the logistics – but audiences are enthralled by Kranz’s directing decisions. Kranz forgoes music and whimsical camera work, instead using long static shots and only diegetic sound, which he maintains for most of the film. He lets this strange stillness and fantastic dialogue generate tension, relying as much on the information he omits as on what he includes. We’re never told right away what’s going on, but the stiffness of the characters’ bodies and the delicate verbal dance they perform grabs our attention and keeps us on an equal footing.

The audience is then introduced to the victim’s parents, Jay and Gail Perry, performed to perfection by Jason Isaacs (“Harry Potter”) and Martha Plimpton (“The Goonies”). They are nervous, weather-beaten, worried and uncertain. Soon the shooter’s parents, Linda and Richard, brought to life by the masterful performances of Ann Dowd (“Hereditary”) and Reed Birney (“House of Cards”), arrive. Almost 20 minutes into the film’s start, the parents are finally left alone, grappling with Kendra’s farewell words: “Hope we all think it was a good thing to do by the time we leave.” from here today.

The ensuing conversation is often difficult to conduct, both for the characters on screen and for the audience. It is soon revealed that the shooting took place six years ago and that parents have faced its aftermath ever since. To say more would deprive future viewers of the impact of their exchange. This is immense credit to Kranz’s script, which traverses difficult terrain with skill and empathy, never glossing over the most devastating aspects of the shoot, nor using it for show or shock purposes. The characters fumble with their words, they backtrack and stutter, and they jump through the stories and pause – mimicking the hesitant and dissonant nature of real speech and adding another layer of realism to already tangible performances.

Kranz’s staging is straightforward, with the camera lingering over a mid-shot in two or four shots of the characters, maintaining an uncomfortable and inescapable intimacy between the audience, the characters, and the events they dissect. When the camera finally switches to the handheld, the subtle sway increases the tension of the scenes. The only unfortunate decision Kranz makes is during the film’s most moving scene, when the camera suddenly leaves the room for an earlier shot of the campaign. For a film so invested in immersion, it’s an abrupt and surprising decision that softens the impact of the scene.

The performances of the film are remarkable. Each of the four actors delivers a sober and heartbreaking performance that never falters. Jason Isaacs, in particular, stands out for his portrayal of a grieving father. Whether or not the audience fully agrees with what the characters are saying, the actors embody their characters so well that it’s impossible not to see the validity of their emotions.

At around an hour and a half, it looks like the movie has reached its cathartic, crisp conclusion – then it continues for another twenty minutes as the characters leave the church. It’s a risky but admirable choice by Kranz that ultimately elevates the film. With such events, there is no â€œcleanâ€ solution, no moment of emotional catharsis that heals past traumas. What is lost is lost. And in the end, the audience may find themselves sympathizing with the shooter’s family almost as much as with the victim’s family. In one of the movie’s most powerful monologues, Linda cries out in tears: â€œAnd the truth is, we thought we were good parents. And in a terrible and confusing way, we still do. “