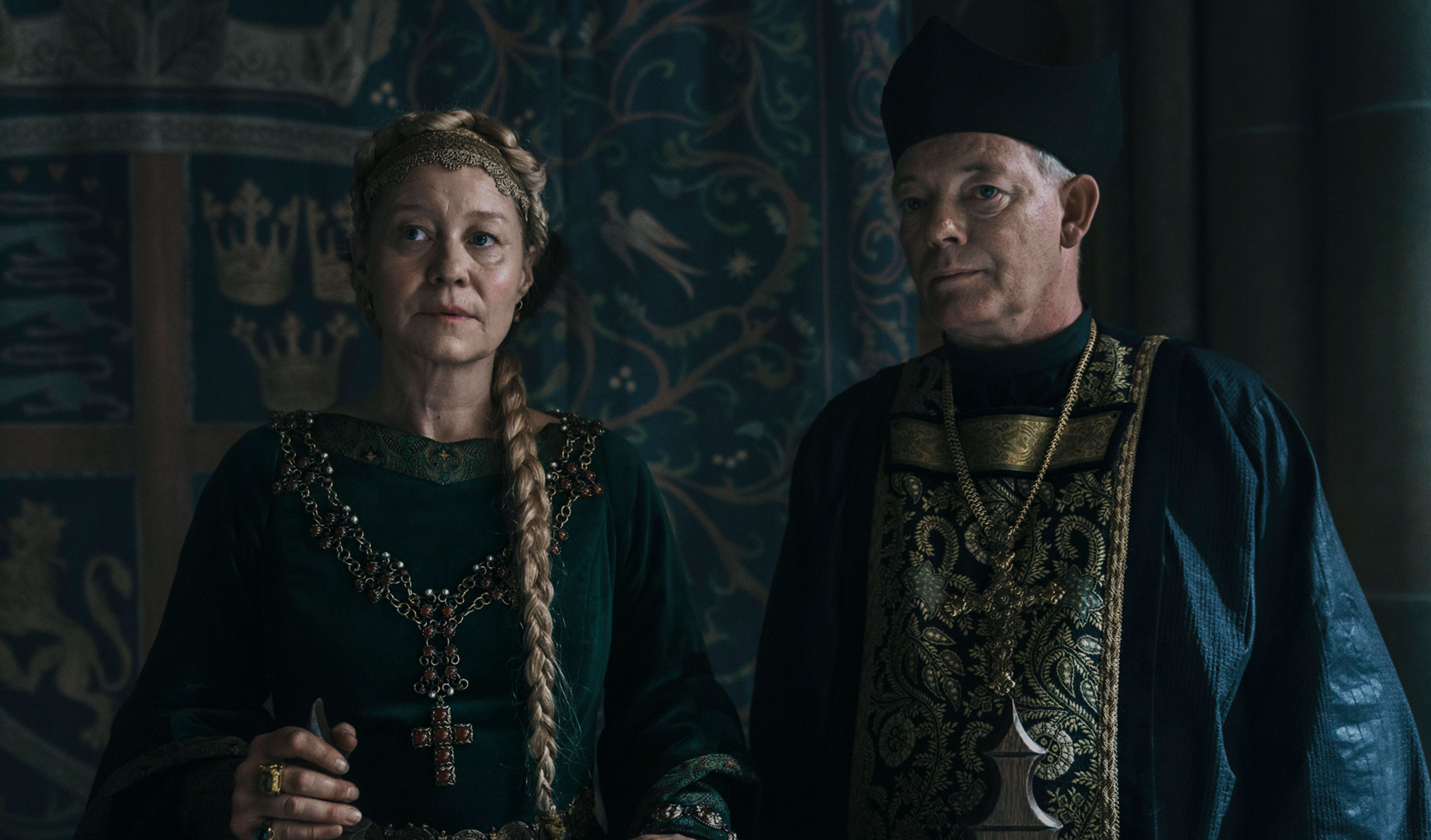 Margrete: Queen in the North opens in blood, with the young princess carried by the king across the battlefield after winning the battle of Visby in 1361. Years later, Margrete, now queen, mediated a union of peace between Denmark , Sweden and Norway, whose strained alliance strengthened the north against foreigners, including Germany.

She reigns through her adopted son, King Erik, and negotiates a marriage between him and the young English princess Philippa, daughter of Henry IV. Terms are yet to be decided, but the union will make the north unassailable, the queen believes.

Then a bomb. A man calling himself Oluf, the Queen’s real son who died of poisoning 15 years earlier, arrives at court to claim the throne. He is imprisoned and Margrete publicly denies this, but she isn’t sure. She interrogates her confidants and finds no one who has actually seen her dead son. What she learns is who arranged her removal.

This plotline spins the wheels of power, and we see a wonderful denouement as Margrete tries to juggle maternal grief and doubt with the political imperatives of staying in control. She visits Oluf at night in his cell and questions him in open court. He hums a lullaby they both know. Everything seems to pile up.

Actor Trine Dyrholm – who appears in another Scandinavian Film Festival highlight, A matter of trust – is unerringly brilliant as a measured and ambitious queen who must shed blood to save the peace. Margrete rules through Erik, whom she adopted as a pale Pomeranian boy; she has invested everything to make him her king. How much should it matter whether Oluf’s claims are true or not?

It is one of the most expensive Danish films ever made and is beautifully shot, with the dark interiors of the castle lit by candles and the heaviness of royal gold. It moves at a majestic pace as the drama deepens and the queen is alternately opposed to the son she adopted and the one who returned.

Familiar faces from the splendid cast include Søren Malling as Queen Peder’s confidant, a clergyman of secrets, and Morton Hee Andersen as the titled Erik.

Director Charlotte Sieling – whose story includes episodes of First UNIT, Borgenand the Mexican drug thriller Queen of the South – guides us through the labyrinthine politics as we follow Margrete’s anguish as a mother and as a queen.

Margrete: Queen of the North is screened as part of the Scandinavian Film Festival, which runs at Palace Nova Eastend until August 10.

Your support will help us continue the important work of InReview in publishing free professional journalism that celebrates, questions and amplifies the arts and culture in South Australia.