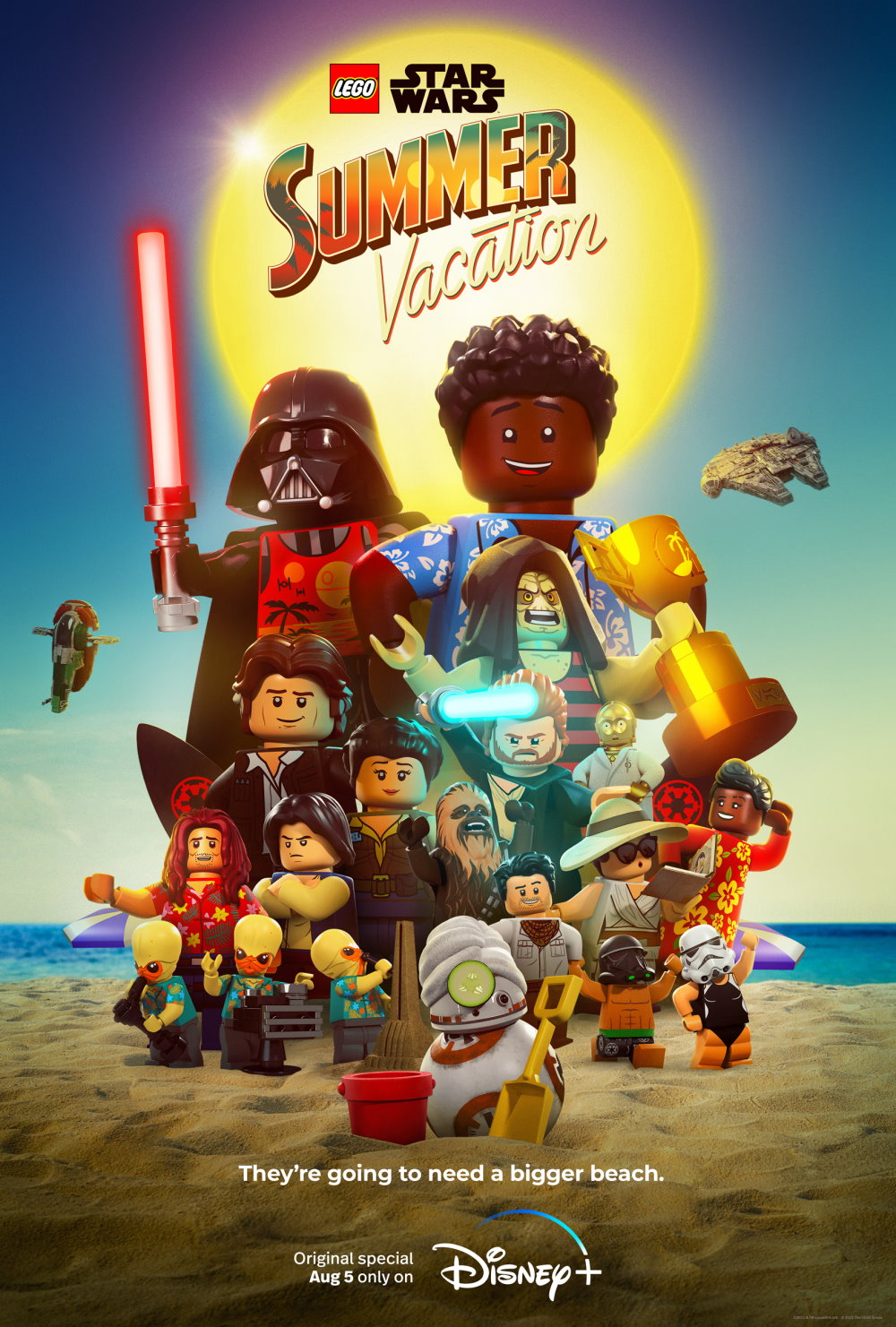 Seeking a well-deserved break from stormtroopers and TIE fighters, Finn arranges a surprise vacation for his friends Rey, Poe, Rose, Chewie, BB-8, R2-D2 and C-3PO, aboard the ultra-luxurious Galactic Starcruiser, the Halcyon.

But Finn’s plan to have one last hurrah together quickly goes awry when he’s separated from the group. While searching for his friends, he encounters three Force ghosts: Obi-Wan Kenobi, Anakin Skywalker, and Leia Organa, who each share their own unexpected stories of vacations gone wrong, helping him understand that vacations aren’t just about to have fun.

The latest in a series that’s guaranteed to put a smile on your face, what might surprise viewers about LEGO Star Wars summer vacation is just how sweet and touching this episode is. Set once again after Holiday Special and Terrifying Tales, Summer Vacation finds Finn and his friends aboard the Halcyon, setting off on a surprise vacation that sees the gang part ways to go on their own adventures while Finn encounters the ghosts of the Force. ‘Obi-Wan Kenobi, Anakin Skywalker and Princess Leia all telling him their own stories, in classic Lego Star Wars style.

What’s lovely about this whole endeavor is how these three stories are told. With Lego Star Wars really its own “thing” within the larger star wars galaxy (“adjacent canon” as writer David Shayne calls it in an upcoming special episode of Making Tracks), characters have the leeway to do things their canonical counterparts don’t, and with many characters voiced by their performers on the big screen it makes for fun reads of the heroes and villains we know so well. While no one will confuse LEGO Emperor Palpatine with the flesh and blood version, Anthony Daniels, Kelly Marie Tran and Billy Dee Williams add just enough bounce to their versions of Threepio, Rose and Lando respectively to make them shine, while James Arnold Taylor is clearly having fun as Obi-Wan Kenobi.

As always the animation is wonderful. Dogfights and shootings in space Lego Star Wars looks incredibly kinetic and impressive, and here is no exception with the Millennium Falcon still looking so cool, while the interior and exterior of the Halcyon are so impressive, if you didn’t want to visit it before in the real life, you will now. But the real heart of the show is the final act. As Finn explains to his friends why he brought them to the Halcyon, we get a “moment”, as Finn recalls meeting Poe and Rey for the first time in the force awakens, receiving his name from Dameron and meeting Rey on Niima Outpost. Rose stopping Finn’s heroic last stand on Crait is seen and added to the sweetest’i love you i know‘ moment this side of the Kef Bir and you have the recipe for another winning entry in the series.

What writer David Shayne and director Ken Cunningham have planned next for the series is unknown, but after the triple whammy of Holiday special, Terrifying Tales and Summer holidays you can be sure it will be an unforgettable moment. This annual trip to Lego Star Wars galaxy has become very enjoyable and fun entertainment that is increasingly welcomed as the live action and animated worlds of star wars keep coming. Let’s not forget to show that the galaxy far, far away is also designed to be fun, and Lego Star Wars does it better than most. Add in the infectious groove of Gamorrean Girls and a star turn from Weird Al Yankovic and you truly have an unforgettable summer vacation, more please!