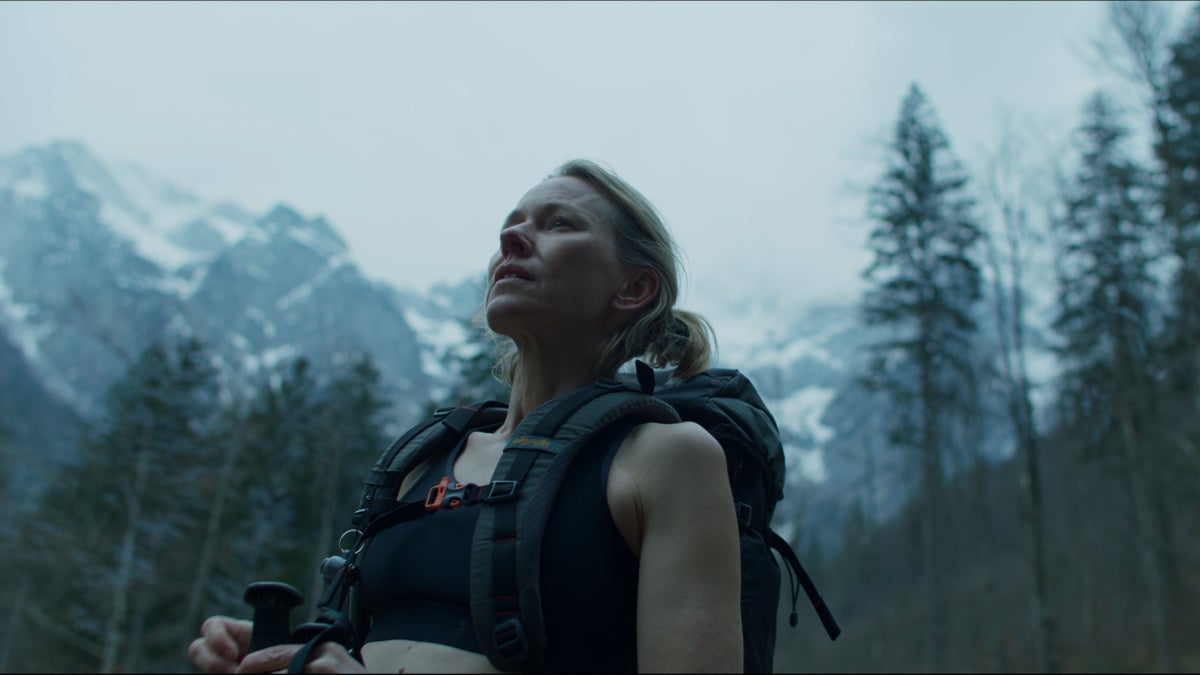 Naomi Watts is no half measure actress, as evidenced by her CV of highly drawn women grappling with natural (“The Impossible”), unnatural (“King Kong”) and overwhelming inner forces (“21 Grams”).

For Watts, it’s as if psychic pain is a renewable resource for her characterizing skills, and lately she seems to have specialized in the dark appeal of perilous solitude, having played a paranoid urban inmate (” The Wolf Hour”) and an isolated mom (“The Desperate Hour”) with all the physicality and interiority they need, whether the movies around her are good or not.

Watts brings that same bodily intensity to Polish filmmaker Malgorzata Szumowska’s “Infinite Storm,” a title that’s also not a bad way to categorize the totality of its oft-relentlessly slapped characters. And like in “The Impossible,” she brings a true story to life as Pam Bales, a registered nurse and mountain guide whose solitary hike up New Hampshire’s famous Mount Washington one threatening day in the fall of 2010, s is transformed into a crucible of survival. and, involuntarily, healing.

Szumowska’s film begins with the kind of ordinary morning details that mark a newspaper feature story (the world first learned of Bales’ momentous day through an account written by Ty Gagne for the New Hampshire Union Leader) but which also allow foreboding tinged with exposure. There’s the pre-dawn alarm clock, moans, and the way the emerging light gently hits her headboard as Pam gets up to get ready for a hike. But a voice on the radio tells us that temperatures will drop below zero at some point. (Are there enough Clif bars, we wonder? Is this hat wool?)

Pam seems unfazed, however, singing in her car and amicably shrugging off concerns from her restaurant owner pal (Denis O’Hare) that it’s not the day for the solo. “The mountains always listen and never respond,” she says firmly. A past life is casually evoked, a life that suggests that today is a therapeutic and thoughtful ascension. Yet as she flees, Szumowska cheekily lets the camera linger on a teddy bear near the door. (OK, we think Clif bars might not be enough.)

With her regular cinematographer Michal Englert in top form, Szumowska’s imagery and pacing capture what’s meditative and physical about Pam’s snowy morning hike, and what’s both breathtaking and eerie on the ground and its weather. (The Slovenian Alps replace the White Mountains of the northeastern United States.) With so many photographs in movies of wilderness, gorgeous as postcards or menacing depending on the mood of a scene, it’s refreshing that Szumowska strikes a striking balance between the two.

When a blizzard emerges in the late morning, Pam begins to turn around when she notices footsteps made by, of all things, sneakers. She assumes novice stupidity, but what she finds is more unnerving: a seated, hunched, scantily clad figure, almost frozen and unresponsive to her questions.

The fact that Pam is a skilled member of the park’s rescue team – a skill that was revealed to us by an earlier scene when she escaped by perishing – makes this ill-equipped hiker one lucky guy. But bringing down the man she calls John (Billy Howle, “The Seagull”) won’t just be about battling a nightfall that comes with a deadly storm, inhospitable passages , minimal supplies and frostbite. She must also thwart the intangible danger of a soul that does not want to be rescued.

As survival cinema, “Infinite Storm” has a certain rough, unpredictable energy, where the wildcard that is John’s disposition clashes with Pam’s tireless and stay-with-me humor, which Watts embodies with a sparkling combination of tenacity, compassion and exasperation. It’s the sequel, however, in which we learn the roots of Pam’s own trauma, and what her experience with John meant, that lays out “Infinite Storm” for the well-meaning but uneven film about grief that it is.

Actor-turned-screenwriter Joshua Rollins turns what was a real-life thank-you letter into a quiet reunion; this summary impulse is understandable, and the actors of Szumowska do just the right thing. But back on the mountain, Watts’ eyes wide and curious, her determined steps, her conquering but also vulnerable gaze, she was already unpacking a character in her own right, whose own struggles needed no explanation. Pulling herself and a desperate stranger from the brink tells us a lot.

When “Infinite Storm” continues to make its case, it’s fine, admirably heartbreaking (a Watts specialty), touching even when it insists, unnecessarily, on being articulate. But the film’s secret sauce is humanity through action, which Pam de Watts with all her heart, knowledge, courage, loneliness, care, irritation and concern shows us when she’s in her element: what lose and find look like in real time.

Back to the Oscars: The Last Time Jane Campion and Steven Spielberg Faced Off