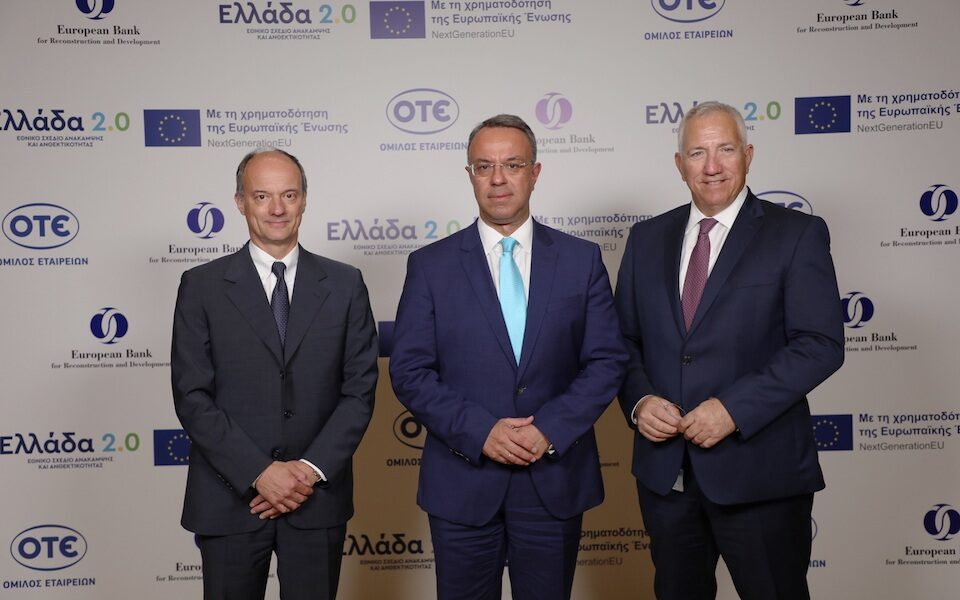 OTE, owned by Deutsche Telekom, on Thursday signed an agreement to raise 150 million euros through a loan agreement with the European Bank for Reconstruction and Development – the country’s first in the digital investment pillar – with the use funds from the National Recovery and Resilience Facility “Greece 2.0”, financed by NextGenerationEU.

These funds will contribute to the deployment of the Fiber to the Home (FTTH) network by OTE in the Greek region as part of its investment plan which is expected to exceed 3 billion euros by 2027.

The agreement was signed at ΟΤΕ headquarters by Dirk Werner, Director and Head of Telecommunications, Media and Technology at the EBRD, and OTE Group Chairman and CEO Michael Tsamaz, in the presence of Finance Minister Christos Staikouras, his alternate Thodoros Skylakakis and the governor of the Greek Recovery and Resilience Agency, Nikos Mantzoufas.

Funds from the Greek Recovery and Resilience Facility will provide OTE with additional liquidity for the partial implementation of its FTTH roll-out plan: it will specifically finance the roll-out to around 371,000 households and businesses in 12 regions (Achaia , Halkidiki, Corfu, Cyclades, Dodecanese, Evros, Larissa, Lefkada, Rethymno, Rodopi, Trikala and Xanthi) by 2027, contributing substantially to the digital development of these provinces. As fiber networks are more energy efficient, the expansion of the FTTH network will contribute significantly to the reduction of greenhouse gas emissions and the green transition of the economy.

Staikouras said that “the loan agreement between OTE and the EBRD confirms the crucial role of the national recovery and resilience plan “Greece 2.0” in the implementation of investments for the digital transition which will have concrete results. in improving the daily lives of citizens and which will contribute significantly to promoting regional growth and innovation.

“Thanks to this investment, which will provide access to the FTTH fiber optic network in 12 regions in the coming years, the digital infrastructure is strengthened and the country’s competitiveness and investment attractiveness are enhanced. The government will continue to work methodically and efficiently to make the best use of NGEU funds and achieve high, sustainable and inclusive growth.

Review of Brian and Charles’ film: Lacks finesse but remains a treat