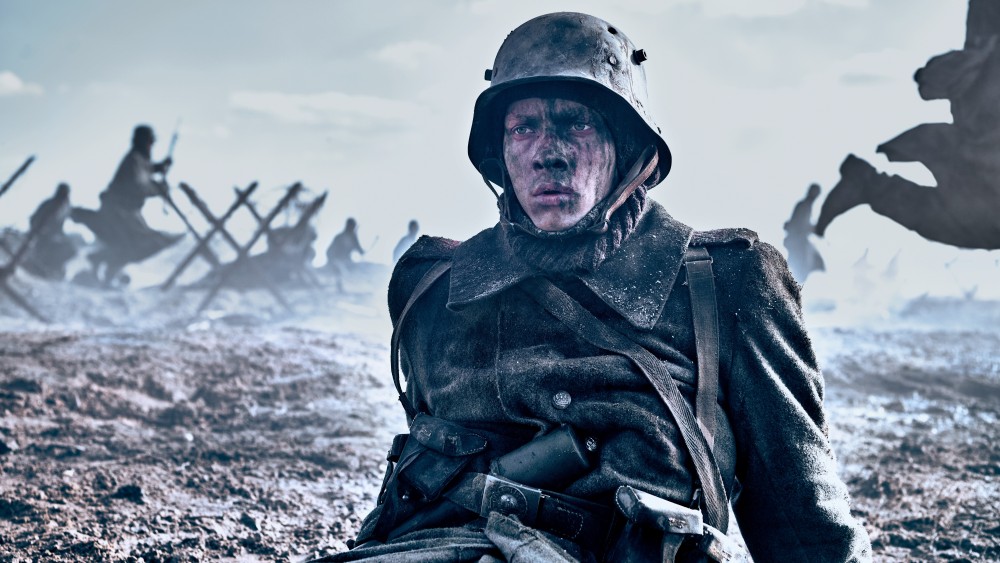 Review of “All Quiet on the Western Front”: Conscientiously Competent and Boring

It’s a fact of modern war movies – or, at least, good ones – that they tend to be horrifying and thrilling at the same time. You could say it’s a contradiction that stems from the larger-than-life, kinetic nature of the film medium. Or you could say it’s a truth that expresses something fundamental about war: that the very reason war persists, despite all its terror, destruction and death, is that there is there is something in human nature that is drawn to war. Movies, in their own way, play that for us. Again, though, I’m talking about the good ones. There is no more powerful example than “Saving Private Ryan”. I’ve never seen a more thrilling war movie, and I’ve never seen a war movie that made me face, more memorably, the bloody fear and indescribable devastation of war.

By contrast, the new German version of “All Quiet on the Western Front” feels like an experience that has been stripped down to the bone – morally, spiritually and dramatically. Based on the 1928 novel by Erich Maria Remarque, this isn’t a film that attempts to turn the infamous meat-grinder horror of World War I trench warfare into some sort of “spectacle,” at the way of Sam Mendes’ video game apocalypse. “1917” did. The hero of the film, Paul Bäumer (Felix Kammerer), is a student who, three years after the start of the war, enlists in the German Imperial Army to fight for the fatherland. He is soon sent to the Western Front, a place where millions of soldiers have already died in what is essentially a homicidal turf war where no territory exchanges hands.

During the war, the “grab” of land on the Western Front was meager; the location of the front line never moved more than half a mile. So why are all these soldiers dead? Without reason. Because of a tragic – one might say obscene – historical accident: during World War I, combat assets were caught between an older, “classic” mode of stationary combat and the new reality of long-range slaughter rendered possible through technology. By the end of the war, 17 million men had fallen through these cracks.

The 1930 Hollywood version of “All Quiet on the Western Front”, directed by Lewis Milestone, is widely considered an anti-war monument. But, of course, if you watch it now, the war scenes won’t thrill audiences like they did a century ago. The bar for on-screen terror and carnage has been raised far beyond that. Edward Berger, the director of the new “All Quiet,” stages his war scenes in what has become the existential standard of bombs-bursting-in-the-earth, debris-flying-everywhere, war-is- hell-because-its-violence-is-so random-mode of ruthless annihilation. He does it competently, but not better than that; it does not begin to touch the level of imagination which gripped us in the war cinema of Spielberg, Kubrick, Coppola, Stone, Klimov. Emerging from the trenches, Paul and his comrades-in-arms are confronted with a relentless rain of bullets, they are plunged face down in the mud, shot in the guts or in the head, they are attacked with bayonets and machetes.

Yet Paul, pale and meek, whose newly issued uniform sprang from the corpse of a fallen soldier (a point intended to illustrate the endless cycle of death during the First World War), fights and survives a one way or another. He hits us like a sweet young man, but there’s a ruthless killer in him. Whirling to shoot one soldier, then stab another, he becomes, in essence, a desperate action hero, and I say that only because I didn’t find his battlefield acumen particularly compelling. Berger, as a filmmaker, wants to bring us closer to war, but the horror of “All Quiet on the Western Front” is in your face and also rather orderly in its presentation. Maybe that’s why it’s numbing.

Great war movies don’t shy away from mixing personal drama with combat. They feature characters as angry and defined as their theater of violence. But the new “All Quiet on the Western Front” is two and a half hours of dramatic minimalism, as if it were somehow a measure of the film’s integrity. The soldiers, including Paul, are barely sketched, and you’re frankly relieved when the film cuts to conventional scenes of German Vice-Chancellor Matthias Erzberger (Daniel Brühl) as he tries to broker a peace with the generals. French who defeated the German army. Negotiations are unilateral; the French, who hold all the cards, want to surrender on their terms. But we register, behind Erzberger, the implacable unwavering resentment of the German officers, which will of course be prolonged in the next war.

Stanley Kubrick, with “Paths of Glory,” made what remains the greatest trench warfare film, and he didn’t shy away from involving us in some real drama. “All Quiet on the Western Front” drags on, so that even after armistice strikes, there is yet another bout of combat, all to demonstrate, with over-emphasized tragic irony, that the body count during World War I kept going up for no reason. Any sane person would agree with that. Yet “All Quiet on the Western Front” is the war movie as a thesis statement. He continues to make his point, leaving you less broken than empty.