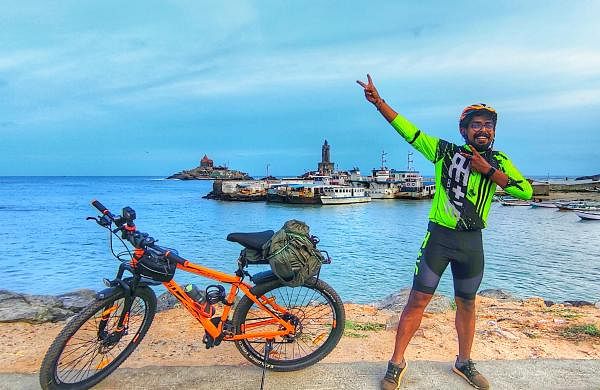 KANNUR: When he decided to take a break from his crazy schedule while deeply immersed in filmmaking, young short filmmaker Vivek Ramachandran was unsure of how to spend his days.
Liking to travel, explore landscapes and meet people, he decided to take a trip to Kanyakumari from Kasaragod by bike. Hailing from Kannur, Vivek left by June 28. He reached Kanyakumari on July 21. After returning from Kanyakumari, he peddled his way to Ponnani on Tuesday. He is on his way to Kannur and is expected to reach his house on Thursday.

â€œRoad trips have always been my passion and this is not the first time. In 2018, I undertook a trip from Kannur to Kashmir. It was a 11,500 km journey through the roads of India. my life, when I was having problems in my personal life, â€said Vivek.
But this time around, he really wanted to take a break because he’s about to make a feature film. â€œI’ve been making shorts for a while now. Since the onset of Covid and the ensuing lockdown, I’ve produced shorts that have been well received on social media platforms. Now the time is right. to go to the big screen, which is a long cherished dream, â€he said.

He was not used to cycling before this trip. But, before leaving for Kasaragod, he cycled for about a month to get used to it. â€œAt first I wasn’t sure I could handle the physical challenges. But, as the trip progressed, I gained strength and endurance, and today I have already covered 80 km, â€he said. On the way to Kanyakumari it was a bit slow since he could only cover about 30 to 40 km per day.

â€œThe trip has been thrilling so far. I have avoided the coastal roads, which will be easier. Instead, I prefer the roads where I could find some of my friends that I have come to know through social networks. I had stayed in their homes overnight and traveled the roads during the day. The love I received throughout my journey from so many friends and acquaintances was thrilling and inspiring. I have been able to listen to so many people’s stories and I have met so many people along the way, â€he said.

â€œIf it hadn’t been for the pandemic, I would have opted for a trip to northern India. But, as these are difficult days, I preferred to drive through Kerala. When traveling by car or by bus, you won’t be able to enjoy the trip as much as when you are on a bicycle or a bicycle. Nothing will go by you like a flash, “he said.

Vivek, from Mundayad, Kannur, who had directed short films, ‘Prakashante Parinamam’, ‘Lathika’ and ‘Ettukettu’, has already covered around 1600 km on this trip. â€œThe trip has been thrilling and fulfilling as I feel I have enriched myself through this ride through the heart of Kerala,â€ he said. Once back home in Kannur, he will start working on the project of his dreams. â€œAlthough I have made short films and documentaries, like anyone else in this field, it is my dream to make a feature film that I hope will come true in the near future,â€ said Vivek.

Loans – what is a principal?