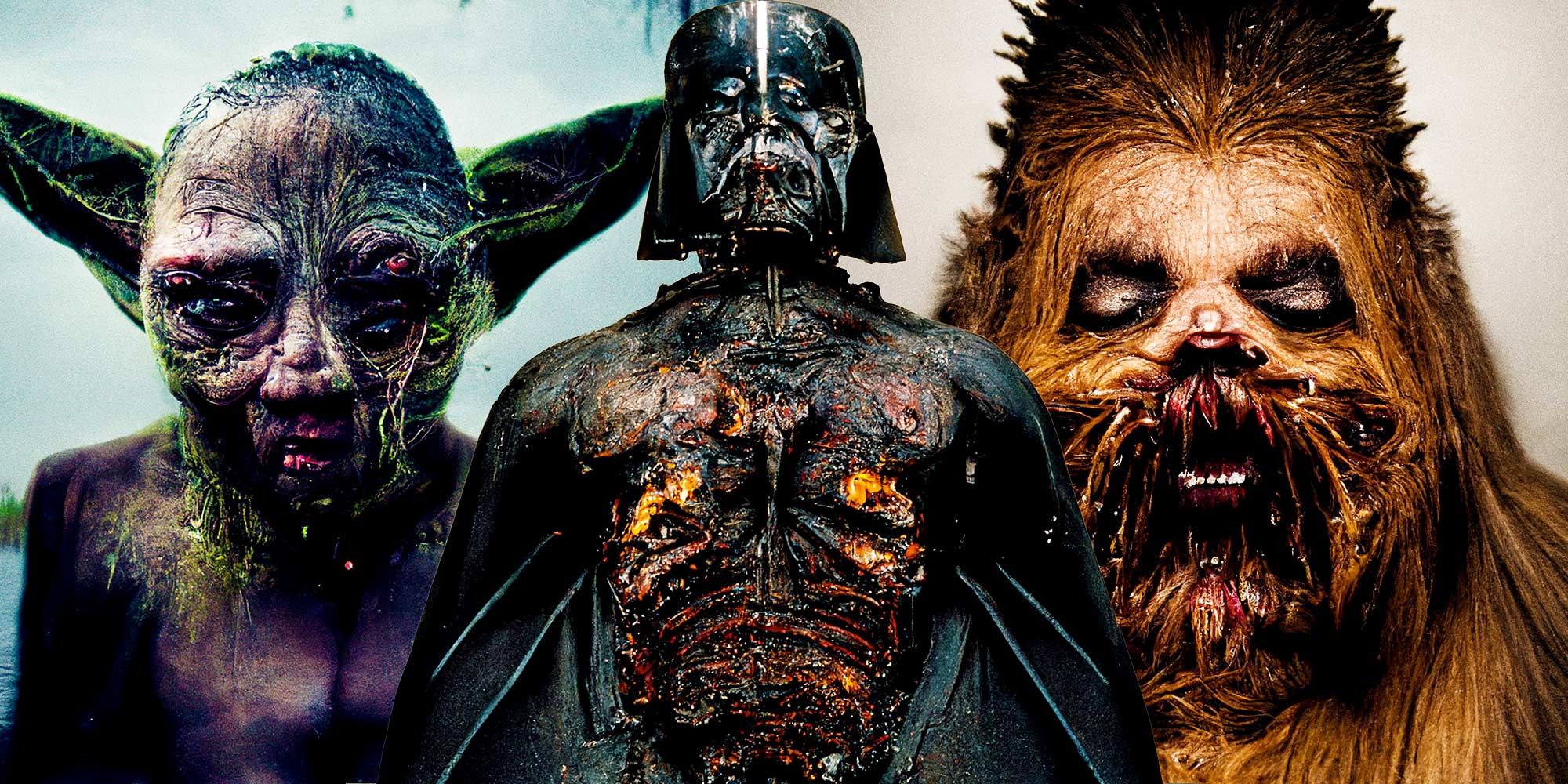 Recently shared art from star wars characters reimagined as horror movie monsters are the stuff of nightmares. Created by George Lucas in 1977, star wars was meant to be an ode to serial films of yore, with Lucas drawing inspiration from Flash Gordon and John Carter of Mars to help fuel its sci-fi extravaganza. The franchise was meant to be an adventurous serialized thread from the start, but it took some dark turns along the way, featuring themes, characters, and creatures that weren’t always considered family-friendly.

Characters like Darth Vader, a cyborg Sith Lord, as well as horribly disfigured Emperor Palpatine have always felt properly villainous and looked the part. But the star wars The universe has also always been populated by alien creatures ranging from cute to weird to downright scary. Even with some of the scariest creatures in the franchise, however, the films played thematically to a PG-themed crowd, never going too far into dark horror-like territory, even if the events, characters and creatures could easily adapt. this mold with some minor adjustments.

Related: Star Wars: The Rise of Skywalker Tries (Badly) To Be A Horror Movie

digital artist Rob Sheridan took this idea and recreated the many characters and creatures from the star wars universes into horror-themed monstrosities that are sure to leave all who see them with nightmares. Sheridan’s intention was to celebrate May 4 by taking a batch of popular star wars characters and reinvent them “like a horror film about the cosmic body” which takes place in “an unholy realm far, far away.” The results are nightmarish indeed, as Sheridan warps, scars, transforms and gore-ifies all of the fan favorites from Darth Vader and Luke Skywalker to Chewbacca, Yoda, Boba Fett, C-3PO and even the Ewoks. Take a look below at Sheridan’s spooky creations from a galaxy far, far away:

Beware of hunters, who will search endless realms for you, turn you to stone, and deliver you to the highest bidder as a fossilized decoration. 7/ pic.twitter.com/MokXRnk3rK

Beneath his charred armor, the Dark Lord’s flesh is sickly and weak, and beneath his helmet, his face grows increasingly rotten, barely kept alive by dark magic and his bionic suit’s life support system. 9/ pic.twitter.com/TacVO12LQo

Although Sheridan’s art is both beautiful and terrifying, it’s not the first time star wars was mixed with the genre of horror. There have been a number of horror-centric stories, episodes, and even moments from films that qualify as part of the genre, including the stormtrooper/zombie book soldiers of death by Joe Schreiber. Before that, a series of books for young adults released in the 90s, titled Star Wars: Galaxy of Feardestined to mimic the success of RL Stine Goose bumpscame out, with titles such as City of the Dead, Army of Terror, Nightmare Machineand brain spiders (among others).

While it can be argued that star wars is aimed at all audiences and fits right into the sci-fi genre, there’s a significant amount of content across the franchise – whether in books, anime shows, action shows in direct or feature films – which could easily be called horror. Most children who grew up with star wars probably had a nightmare or another about something in the show, be it the Sarlacc Pit, The Rancor, The Wampa, or even The Ewoks, depending on different sensibilities. With Sheridan star wars digital art project now on display for all to see, it’s now hard to imagine avoiding a nightmare.