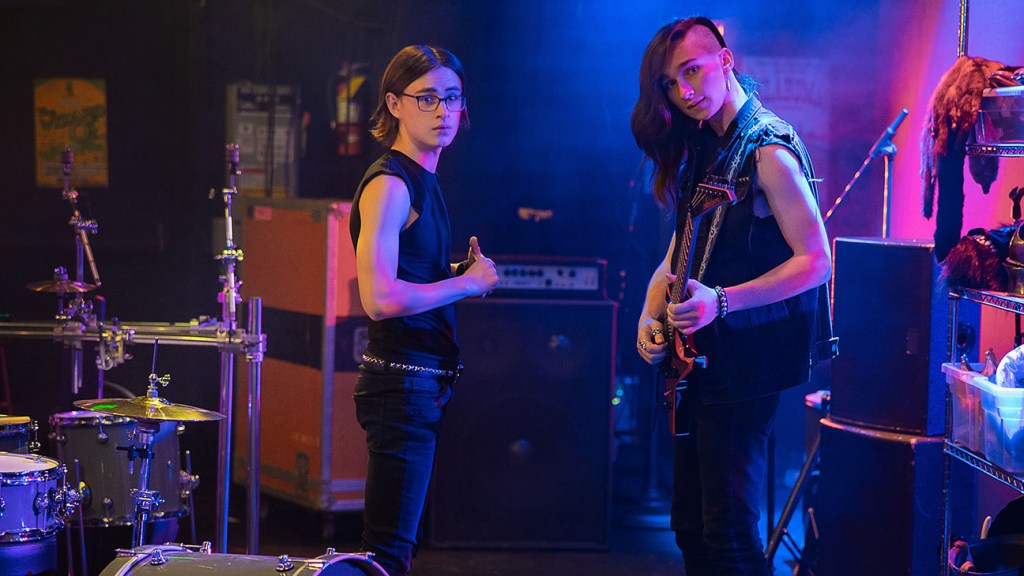 Any game of thrones fans hoping writer DB Weiss and executive producer David Benioff will find a place for visions on the subject of dragons and wizards should look away from this prosaic, reality-bound Netflix tale, which holds no surprises. Those looking for emotional insight might instead listen to The Mountain Goats’ lo-fi masterpiece “The Best Ever Death Metal Band in Denton,” which covers similar ground in under three minutes, creates more compelling characters even without dialogue and might make you cry before it reaches its catchy chorus of “Hail Satan”.

Adrian Greensmith plays Hunter, a lifelong headbanger who convinced his squarer best friend Kevin (Jaeden Martell, of the new This movies) that creating a band will turn the two high school outcasts into heroes. After arguing with classmates in a milquetoast cover band, Hunter learns that his school will soon host the grittiest of musical movie plot devices, a battle of the bands. The problem is, SkullFucker only has one lead guitarist and one drummer.

As Hunter embarks on a frantic hunt for a bass player, Kevin stumbles upon the answer: Emily (Isis Hainsworth), a quiet girl whose temper erupts when she skips her meds, plays the cello well, and has an ear for drama. by Black Sabbath. Hunter scoffs at the idea of ​​putting a cellist (not to mention a girl) in his badass band; Weiss’ script conveniently forgets that the marriage of metal and strings has been common since at least the ’90s, when cello quartet Apocalyptica rose to fame for their Metallica covers.

The two boys suffer a predictable falling out, leaving Kevin to enjoy a few coming-of-age perks (first love, acknowledgment of his quickly acquired drumming prowess) while Hunter’s showery dad (Brett Gelman) sends him off to a “wellness Center”. As with Emily’s “happy pills,” the hospitalization here is just a throwaway plot, not an invitation to examine whatever issues might have led the kid to Metallica and Ozzy in the first place. The film uses it as the setting for a Joe Manganiello cameo, then lets Hunter escape with an ease that would baffle the heroes of this Mountain Goats song.

Greensmith stands out here, delivering a believable passion for Hunter’s signature music and mastering his dismissive attitude towards anything but metal. Once or twice we see places that Sollett (Raising Victor Vargas, Nick and Norah’s Infinite Playlist) could have turned the character’s enthusiasm into a jaw-dropping class moment à la school of rock; but the film stops before unearthing the star which hides in him.

(Poor Hunter, with just a metal newbie as his sidekick, also lacks the social connectedness kids often find outside of the musical mainstream. Watch teenagers dance to narcoleptic cumbia in Fernando Frias’ recent film. I’m not here anymore: Now those the children, playing with defiance on all that makes them different, are Metal. And their bond is so palpable that it’s heartbreaking when one of them has to leave for the United States)

While there aren’t many laughs in the way of this battle of the bands, Sollett’s unpretentious cast and airy pace ensure we won’t get too bored until we get there. Will Rawk triumph over the kids who think Ed Sheeran is cool? Will blood be spilled on stage, and if so, will it be used to summon demons? Will anyone who actually owns a Motörhead record still watch at this point? “Yes” is the answer to at least one of these questions, but certainly not all of them.