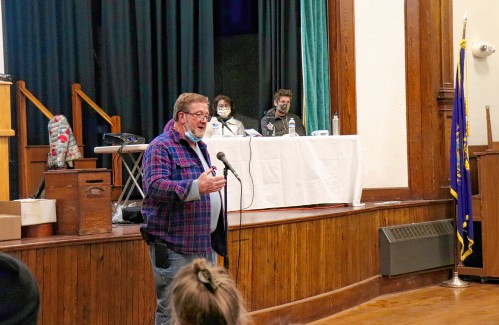 Warner officials who hoped to build a sidewalk to connect downtown to the Market Basket mall came away empty-handed from Wednesday’s town meeting after residents rejected design engineering plans.

The proposed article on the terms of reference was to establish a capital reserve fund with $95,111 to do an engineering study of a potential sidewalk to connect downtown Warner to the commercial and residential area of ​​Exit 9, s’ extending from Roslyn Avenue to the West Main Street roundabout, known as the Intervale district. The city was chosen to receive a grant from the American Rescue Plan Act (ARPA) to fund the project.

But on Wednesday night, attendees voted 78 to 74 to change the article to instead earmark $5,000 for a study — to be combined with $20,000 of existing funds — and create a study committee. including residents who own property along this road.

Residents ultimately voted 99 to 40 against the amended article.

Proponents of the sidewalk project said it would make the city safer and more walkable, improving the community’s health and environment. A resident at the meeting said she sees pedestrians walking down this road every day to get to work or to access groceries. But other residents said the sidewalk would be expensive to build and maintain, and that in the absence of motor vehicle accident data, no clear need for a sidewalk has been demonstrated.

Wednesday’s meeting sometimes became contentious. Attendees were quick to challenge most of the spending stories and express skepticism about the city’s handling of funds. Some residents encouraged others not to vote for items, hoping it would encourage city officials to tighten their belts in the future.

Participants adopted the city’s operating budget of $3,675,514 as proposed, which represents a 4.3% increase over last year’s budget of $3,524,207 after much debate. The budget includes a 4% increase for municipal employees and another 2% increase that will be awarded based on merit.

Residents also voted 129 to 34 to pass a 10-year, $2,615,000 construction project loan to repair and improve the city’s roads, but only after changing it to be more specific and restrict how the funds could be used. The amended version authorizes the city to improve only Schoodac Road, Poverty Plains Road, Pumpkin Hill Road, Mason Hill Road and North Village Road and to have the roads committee direct plans, cost estimates and contract offers rather than the board of directors. Selectors.

Highways Officer Tim Allen said while he understood the city’s need for accountability, he wanted to be able to start work as soon as possible to avoid wasting valuable construction time.

“With the new layout and design and two compactors, [Foreman Varick Proper] think it will solve some efficiency issues and some safety issues,” Bower said. “And hopefully with the new redesign solves some of our real waste issues that we have as a city.”

Residents also voted 57 to 32 to approve $108,445.75 to replace the Riverside Park skate park. Although the original request was for $56,000, half the amount needed, Parks and Recreation Commissioner Tim Blagden proposed an amendment for the full amount, which voters accepted.

In polls on Tuesday, Warner residents voted 253 to 224 against a proposal to fund the construction of a STEAM (science, technology, engineering and math) wing at Kearsarge Regional High School for $22,270,344. . The STEAM wing ultimately failed district-wide, as it failed to gain the necessary number of votes among all of the sending cities. Warner residents also passed a school operating budget of $47,172,492.

In the votes for city officers, Michael Kevin Brown won the race for checklist supervisor with 261 votes, beating the other candidate, Karen Coyne, who got 163 votes. Michael Cutting won a three-year seat on the budget committee with 432 votes and written candidate Harold Blanchette won the other three-year seat on the budget committee with nine votes, beating second-placed written candidate Richard Bixby, who received four votes.